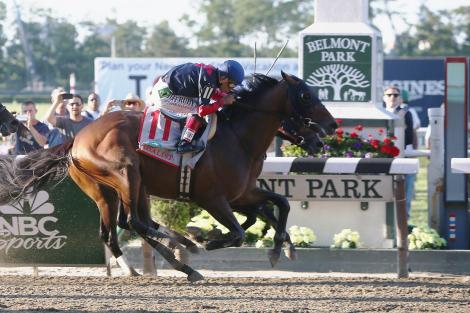 Today is the 145th running of the Travers Stakes, a 1 1/4 mile race for three year-olds on the dirt at Saratoga.

My opinion counts for little, so if you’re looking for good tips, you might want to try the Daily Racing Form. But hey, you’re here, so read on, and good luck!

Bayern, by Office Wild out of Alittlebitearly (Thunder Gulch), is the morning line favorite at 2/1. He won the Grade 3, 1-mile Derby Trial (Churchill Downs), the seven furlong Grade 2 Woody Stephens (Belmont Park), and the 1 1/8 mile Haskell (Monmouth Park), but was really disappointing in the Preakness Stakes, finishing ninth, where he had a bad trip in the early going. A good start and a good trip will put Bayern in the money, winning will depend on how he does in the last quarter.

Tonalist (3/1) by Tapit from Settling Mist (Pleasant Colony) won the Belmont Stakes, closing a 1 ½ length gap on Commissioner down the stretch to win by a head, and the Grade 2, 1 1/8 mile Peter Pan over Commissioner by four. He finished second in the 1 1/8 mile Jim Dandy behind Wicked Strong (7/2, by Hard Pun out of Moyne Abbey). Tonalist’s race will depend on when Joel Rosario sends him, and whether he can get clear around the final turn and the stretch.

Wicked Strong came from two lengths back in fourth place to win the Wood Memorial, before finishing fourth in the Kentucky Derby and in a dead heat for fourth in the Belmont with California Chrome.

Longshots that have a chance:

Mr. Speaker (10/1) has done most of his racing on turf, and finished seventh on the dirt in the Holy Bull at Gulfstream on January 25.

Commanding Curve (15/1) is underrated. He rand a great race under Shaun Bridgmohan to finish second in the Kentucky Derby, but didn’t have anything in the Belmont, where he finished ninth. He finished foruth in the Jim Dandy behind Wicked Strong, Tonalist, and Kid Cruz.

Kid Cruz (12/1) won the Grade 3 Dwyer and finished third in the Jim Dandy. Might fill out the back end of an exotic for you, but 12/1 on the morning line is optimistic for the son of Lemon Drop out of Layreebelle.

They’re here, so I’ll mention them:

Charge Now, (15/1) by Tiznow out of Supercharger (A.P. Indy) finished second in the 1 1/8-mile Curlin Stakes on July 25 at Saratoga in a tight photo behind V.E. Day (15/1)(English Channel, Smart Strike by Deputy Minister) and ahead of fourth-place finisher Viva Majorca (20/1)(Tingo, Quick Town by Cape Town).

I don’t really think any of these three horses has a shot at winning the Travers Stakes. Other than the Curlin, Charge Now’s only significant Stakes race was a 7th place finish in the Grade 3 Iowa Derby.

Viva Majorca’s only race longer than seven furlongs and outside of Maiden or optional claiming ranks is the Curlin Stakes. Good luck to him and jockey Julien Leparoux.

Ulanbator finished fifth in the Jim Dandy and third in the Dwyer under Julien Leparoux, but probably couldn’t win this race if Genghis Khan was his jockey. Brian Hernandez will be in the irons. Might as well go out there, eighth place in the Travers pays $25,000.

May the trifecta be with you!