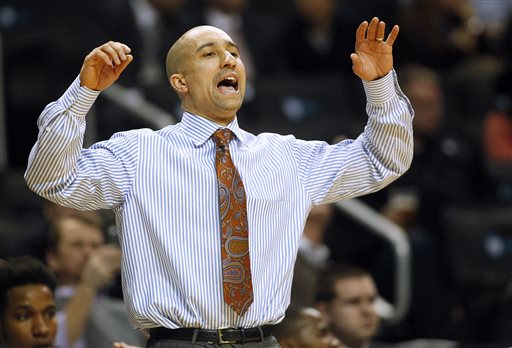 THE BRONX, N.Y. – The growing pains of the young Fordham basketball team were on display as the Rams lost to Virginia Commonwealth University 85-66 at Rose Hill Gymnasium in the Bronx on Thursday.

Fordham played aggressive defense early, hustling back and boxing out in the lane to grab 13 defensive rebounds and blocking seven V.C.U. shots in the first half.

Virginia Commonwealth found themselves down 26-19 with just over six minutes left to play in the first half, after going 4:13 without a field goal.

“Fordham did a great job early in the game being aggressive and getting us on our heels,” said V.C.U. head coach Shaka Smart. “We didn’t have as much energy as I would have liked us to have early on.”

After Shaka Smart called a timeout for V.C.U., they were able to begin chipping away at Fordham’s lead, finally tying the game at 30-apiece when Rob Brandenberg made two free throws with 3:15 left in the first half. Juvonte Reddic’s layup gave V.C.U. a 32-30 lead with 2:32 left, and Fordham never regained the lead.

Despite shooting just 10-for-29 from the field in the first half, Virginia Commonwealth took a 34-32 lead to the locker room at halftime.

Smart’s club responded, rattling off a 21-10 run in the first 8:02 of the second half. Included in that run three three-pointers by V.C.U. senior Rob Brandenburg, who was 4-for-4 from three-point range in the game.

“He’s capable of that,” said Smart. “He seemed to have a higher level of focus than he had in other games. That’s easy to say since he made four threes, but you could see it in his eyes. When he as a senior steps up and makes big plays like that, we’re very, very tough to beat.”

As V.C.U. continued to force turnovers and convert those turnovers into points early in the second half, lengthening their lead, Pecora could see frustration from his players, and knew what begat that frustration.

“That’s the residue of losing,” said Pecora, who is 33-81 in his fourth season with Fordham. “Teams that win find ways to win, teams that lose, they know how to lose.”

Pecora also noted that Fordham’s 14 turnovers, including five by guard Bryan Smith, hurt his club’s effort. Three of Smith’s turnovers came during V.C.U.’s run at the start of the second half.

“Part of that is that the guards weren’t doing a good enough job freeing themselves, and Bryan was stuck on an island on a couple occasions trying to get the ball up,” Pecora said. “You look at those five, and Travion Leonard’s two, and that’s half of our turnovers.”

Overall, however, Pecora noted that Fordham’s 9-17 season has been precipitated by two major issues.

“One has been getting that kind of team effort for 40 minutes consistently. We’ve had a couple of games we’re we’ve gotten it and we won a couple of games early,” said Pecora. “And our offensive field goal percentage. We had some really good looks, and if you’re going to beat V.C.U. you’ve gotta knock those down. We shot 5-of-18 from three. That can’t happen.”

Pecora, however, intimated that this is all part of a young team, which includes 11 freshmen and sophomores, growing and learning together.